What does a centuries-old road through the heart of Germany look like today?

This is what I want to find out in the next couple of months, when I walk from Frankfurt to Leipzig on a route that is known as the Via Regia.

History of the Via Regia

For centuries the Via Regia was one of the most important roads in Germany. It connected historical regions in the West and the East of Germany as well as the biggest annual fairs in Frankfurt and in Leipzig.

Medieval German kings and their courts traveled on it as well as some of the most influential Germans of all time such as Martin Luther or Goethe.

It saw armies on the march in the Thirty Years War and Napoleon passing through after the decisive Battle of Leipzig.

During the Cold War the Via Regia was split in half by the Iron Curtain and the Western part was a strategic hot spot known as the Fulda Gap.

While these highlights sound impressive, you can still argue how they are relevant today.

I want to see for myself what traces history left on this road that is being used for centuries.

There are obvious sites like the historic towns of Fulda, Eisenach or Erfurt, which were important way-stations on the road.

However, I am more interested in the small snippets of history that I don’t even know about yet: Old bridges, street names, inns, castle ruins or battle fields.

Walking, in my opinion, is the best way to find these kinds of places on the wayside.

Besides, for a long time walking was the most common way to travel on the Via Regia.

Today however, most of the historical route are modern roads, optimized for motorized traffic. Therefore, I don’t expect too much scenic walks.

It is a total distance of about 350 km from Frankfurt to Leipzig and I expect about 15 days of walking. These will be spread out over some time as I will only be able to do some walking on the weekends.

If you are interested in the project, you can make sure that you don’t miss an update by: 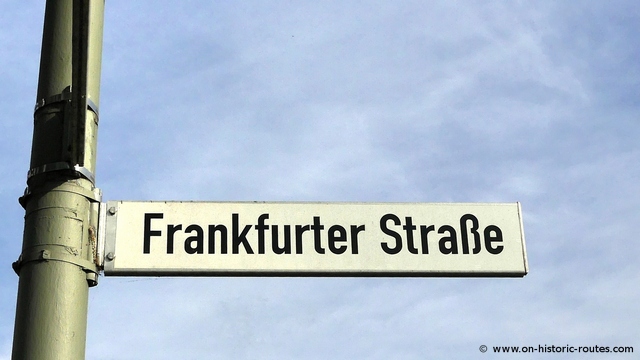